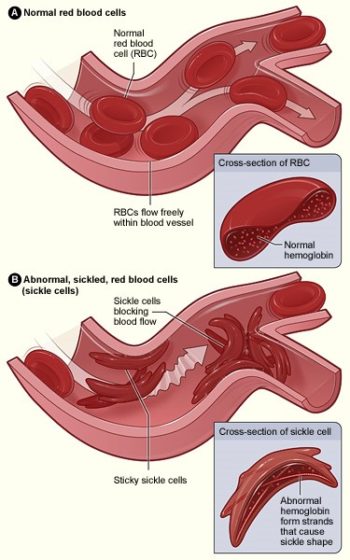 Sickle Cell Disease is a genetic condition in which the protein that carries oxygen in the blood is misshapen. The result of this sickle-shaped hemoglobin is less oxygen to parts of the body, red blood cells getting “stuck” and occluding certain vascular areas, and red blood cells that die earlier than their normal counterparts.

While there is no specific information documenting the number of individuals in the correctional systems that suffer from Sickle Cell Disease, throughout the world Sickle Cell Disease affects millions of people. It is particularly common among those whose ancestors came from sub-Saharan Africa; Spanish-speaking regions in the Western Hemisphere (South America, the Caribbean, and Central America); Saudi Arabia; India; and Mediterranean countries such as Turkey, Greece, and Italy. In the United States, the Centers for Disease Control and Prevention estimate that approximately 100,000 Americans are affected by Sickle Cell Disease; that it occurs in 1 out of every 365 Black or African-American birth, and in 1 out of every 16,300 Hispanic-American births; and approximately 1 out of 13 Black or African-American babies is born with Sickle Cell Trait. Sickle Cell Disease occurs more often in areas of the world where malaria was (or still is) common, and research has indicated that having the sickle cell trait is protective towards the individual having the severe form of malaria.

The National Commission on Correctional Health Care has determined that Sickle Cell Disease is one of the chronic illnesses for which guidelines must be implemented and followed in both the jail and prison settings.