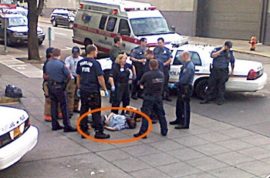 It is 5:00 pm on a Saturday night, and Mr. Joel arrives at Booking in the County Jail in the custody of four Deputies. The Deputies tell you that he was picked up at the train station because he was “acting crazy”, pulling his clothes off and screaming that he “did not want to go”. They tell you that he has been on a methamphetamine binge since Thursday morning according to his girlfriend, who was at the train station trying to get him to come back home. The Deputies were called when bystanders were concerned for her safety. Security orders the use of the Restraint chair per their policy, and you are the nurse standing by to perform the post-restraint evaluation. Mr. Joel continues to struggle with the Deputies, showing almost superhuman strength. The Deputies use the taser on Mr. Joel, but he is oblivious to the pain. The Deputies finally get Mr. Joel restrained, and he stops struggling. You approach him with caution, ready to complete your nursing assessment. You speak to Mr. Joel, but he does not respond. His head is back in the chair. You attempt to obtain a pulse, and palpate none. His skin is extremely hot. You auscultate for an apical rate, and there is none. You tell the Deputies to get Mr. Joel out of the restraint chair and call 911. CPR is initiated, but Mr. Joel is pronounced dead in the Emergency Department. The autopsy shows no apparent physical cause of death.

You have just witnessed the medical emergency known as Excited Delirium.